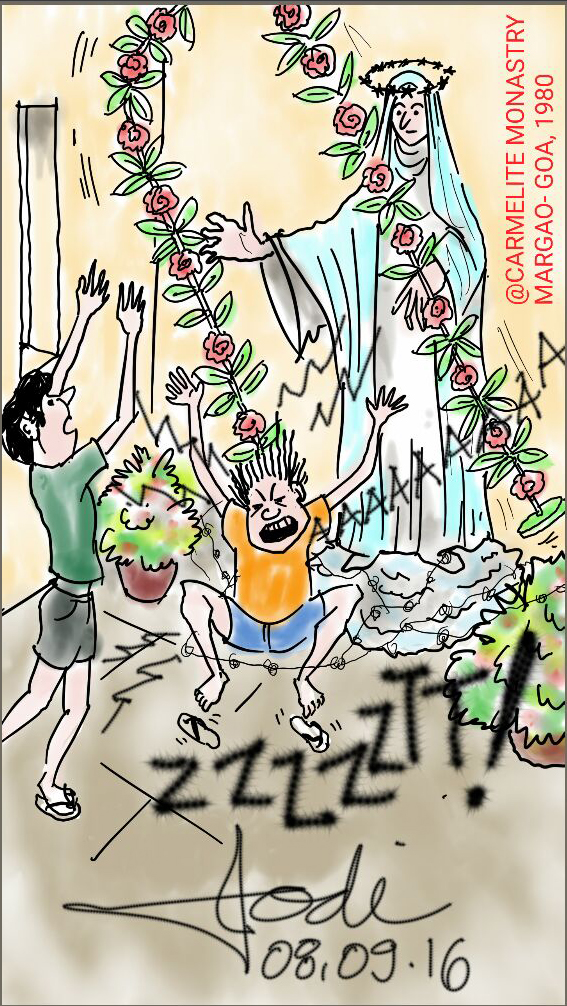 I was an altar boy from the early age of 6 and I served mass until the day I left Goa for Dubai (When I was in my 24th year!).

Almost all of those years, I was associated with the Carmelite Monastery in Pajifond/Malbhatt, Margao. Some masses were served in the Grace Church where I was a member of the Grace Youth Association.

The Carmelites were monks who built a huge monastery half way up the Pajifond hill that joined the Monte hill further up. My service as an altar boy started when one day, the boy who was nominated for the way of the cross, fell ill and there was no one to replace him. I was only six years of age then and brother Nicholas, who was in charge of the altar boys, hurriedly dressed me up in the brown woollen vestments and made me one of the candle bearers in the procession.

Thereafter, since I was seen with my grandmother at the 5.45 am mass every day, I was made a standby altar boy in case there was a no-show. Initially, I was assistant to an older altar boy (The late Felix, lovingly called ‘Feché’) but soon, I had learnt the ritual and I was promoted to a full-fledged altar boy. My talent as an artist was recognized very early and I assisted Inacio and Anthony, two senior altar boys who were good electricians, to be in charge of decorating the church (and statue of the saint whose feast it was). Two statues dominated the church apart from the central crucifix – Mother Mary holding little Jesus and, Santa Theresinha (of Child Jesus).

Fr. Antonio Silva was a well-known preacher during those days and he was very close to our family. During those days, a military truck from 3MTR Training Camp would be sent to the monastery to pick him up, to say mass at the military chapel. I would sit at the back of the truck while he sat with the driver in front. The reason why we altarboys would quarrel to serve mass at the camp was because, after every mass, the priest and altar boy would be invited to a hearty breakfast prepared by the wives of the military men!

The storage room inside the sacristy was full of brass accessories. Once every year, certain altar boys would be selected to ‘brasso’ the blackened candelabra and thuribles and make them shine until one could see their faces reflected on the metal. The prize for doing all this work was the ‘reste’ (Remainder) of the host bread, which was a thin wafer that tasted great with tea! … and there would be bagfuls of those to take home! It also was the prize given to those who assisted in the making of the hosts on heat presses.

Once a year, we would join the girls from the Legion of Mary and go on a fully sponsored picnic with the younger priests. Many of us had our first taste of love and heartbreak during those outings (Strangely, none of those relationships lasted through our college years!)

Some of us altar boys were very naughty and would take a swig of the sacramental wine when the priest was not looking! (God forgive us for that!). Sometimes, we would enter the kitchen from the back door and take off with biscuits when the old cook was not looking.

All in all, it was a great childhood. There were times when I would spend hours at the blessed sacrament, bargaining with God for the life of my grandmothers. My prayers kept them alive first through SSC, then the 12th standard and lastly, even through my graduation! Looking back, I can say that every prayer of mine was answered. My service to God was paid for handsomely and I reap the blessings of it to this day!

One thought on “ALTAR BOY CONFESSIONS”

I Dare You to Figure Me Out

Of life, love, travel and more

If my kind of crazy connects with yours, consider this a date..

A daily selection of the best content published on WordPress, collected for you by humans who love to read.

The best longform stories on the web

The Art and Craft of Blogging

The latest news on WordPress.com and the WordPress community.